Making up for lost time.

I've gone a month since the last time I posted here, and this is the third post tonight. It's Feast or Famine!

Last June I decided I wanted to learn C++, in order to port a software app to my smartphone. As expected, I never really followed-through, and the project went nowhere.

For the last couple of weeks things have been frighteningly slow at my job, so instead of spending my days reading Slashdot and waiting for the phone to ring, I decided to try and learn C#. (Why C#? It's what my company is beginning to use for development, and they are in need of C# programmers.)

I started with a short, slick book called 'Microsoft® Visual C#® 2005 Express Edition: Build a Program Now!'. I'd purchased the book months ago, primarily because it was $5, so I had it handy. The book was useful to teach how to use the Visual Studio 2005 software, but it didn't really teach the C# language at all, so by the end of the book I'd written several neat little programs by following the steps in the book, but still didn't know C# at all.

After I'd finished that book last Friday, I went to Borders and bought 'Head First C#'. This book is excellent! It's actually fun to read. (Really!) The book is entertaining, interesting, and informative. It's well-suited to a beginner like me. I assume that an experienced programmer woould be frustrated by the lack of depth, but for anyone trying to learn programming from scratch, I can't recommend this book enough.

I'm on page 89, and several times so far I've found a bit that was so funny I had to recite the text to Jessica. And, she actually found the bits funny too!

The authors host an online forum for readers of the book as well. The discussions on the forum discuss exercises in the book and clarify things for confused readers. There are listings of corrections for early printings. People can post questions and get answers from other forum members. People can upload their own programs for others to download and review.

The whole thing is a lot of fun.

Maybe, just maybe, I'll pursue this to a conclusion, and actually learn something...


PS: There was nowhere above to really fit this in, but Visual Studio is a very neat program. It's always fun to bash Microsoft, but I've now played around with both Visual Studio 2005, and Visual Studio 2008, and VS is just an excellent program. The intelligence this program contains is remarkable. It just blows me away.
Posted by Steve at 11:31 PM No comments:

Coach Steve (No, I'm not kidding!)

A few weeks ago I received an email from a commissioner of the town soccer league. It seems Nate was on one of 4 teams that had no coaches, and the league was desperate. They were asking if anybody would volunteer to coach a team.

I replied that I was completely ignorant of soccer or coaching in general. Hell, my idea of being athletic or active in any way is walking across the den to retrieve the remote control. BUT, if they wanted me anyway, I'd do it.

So, I'm now the Coach of The Sharks, Sunday 1-2 Division, Mountain Top League In-House Soccer. (Check out that gut!) 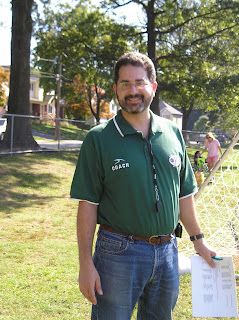 Nate and I had to attend a family function the day of the first game, but I've got a fantastic assistant coach, and he took care of things far better than I could have. The picture above is from our second game (we won the 2nd game, fwiw). Nate had fun at the second game too. 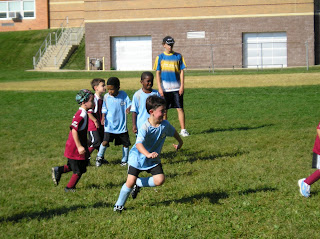 Since becoming Coach, I've gone to a Coachs clinic and also a Parents clinic, and I've learned a bit about soccer. I'm still not really knowledgeable, but I'm not as ignorant as I was previously. And coaching the team is fun.

The talk for the last week has been the impending meltdown of the United States financial system.

I'm a pretty smart person. I try to keep up with the news, more than most Americans I think, and probably to my emotional detriment. On the other hand, I was never a very interested student during school, and I tend to have little interest or aptitude for financial matters.

As far as the financial crisis goes, I have to admit, I just don't get it. I'm not trying to be a smart-ass, and this isn't a rhetorical device to make a point. I honestly don't understand the crisis.

As far as I can tell, on a huge scale, enormous banks made a lot of unwise loans, to people that were unlikely to be able to meet their obligations and pay off the loans for their houses. Then, a too-large number of those borrowers were unable to pay the loans, and those unfortunate people lost their homes when the banks foreclosed.

So at this point in the story, the banks now have a bunch of homes, when they'd prefer to have money. And a bunch of people have to find somewhere to live.

This scenario resulted in a bunch of banks facing bankruptcy, or needing to sell themselves to somebody with deeper pockets.

Question: I have no connection to the in-trouble bank. Why/how does this affect me? Other than a general sense of compassion for a failing business and the soon-to-be-out-of-work bank employees, why would I care? Bad stuff happens all the time; what makes this a special case?

OR: I do have dealings with the bank. I'm a borrower - undoubtedly somebody else will buy the loan, so I still need to make my payments - how am I affected?

OR: I do have dealings with the bank. I'm a depositor - the FDIC will cover me up to $100,000/account, right? And if I've somehow acquired that much moolah, surely I'm sensible enough to not keep more than $100,000 in any single account, I'd think. So, again, where's the problem?

Given the above, what's the rationale for the government to step in and give $700 Billion to the banks? The Daily Show last night played a clip from, I think CNN, stating that amount equates to 2000 McDonalds apple pies *per US citizen*. I think the apple pies run 2 for a dollar. If so, and if my off-the-cuff math is correct, that works out to $1000/person.

Seems to me, IF Congress and the rodents at 1600 Pennsylvania Ave can give out $700B to help the economy, sending $1000 to every taxpayer in the country would probably stimulate the economy, and help substantially more than giving that amount to Lehman and JP Morgan.

Again, I really don't know what I'm talking about here, and to be fair I haven't taken any time at all to try and learn about the problem yet. I've been busy, and the idea of reading economics webpages sounds about as much fun as washing the paint out of a roller after painting my den.

But sooner or later I guess I'll have to read up on this, just so I'm not ignorant when I hear the economic disaster discussed in my presence.

In a more perfect world, the crisis discussed around the water cooler would be the failure of the Sega Dreamcast, or the inability of the Saints to put Denver away last week. Oh well...
Posted by Steve at 10:54 PM No comments:

I just noticed the below post in my list of blog entries, listed as a 'DRAFT'. I dont' know why it's a draft and wasn't posted. I can only state that the linked-to solution I write about didn't work for me, and until I factory-reset the phone several months later I still had the Windows Live email choice. Maybe that's why I never finished the original post...

Unfortunately, ever since then there was an entry in the Messaging application to check Windows Live messages. Once I tried to delete the entry, and couldn't figure out how to do so. This afternoon I decided to look online for a solution.

I found a few pages with instructions for removing the Windows Live entry. All provided this solution:

***********
open Windows Live in Start - Programs on the device. In the Menu, select Account Options and select Switch Accounts. This will remove all emails from your device. When done, the EULA page will appear. On that screen, make sure you select REJECT. Windows Live setup will stop and you will be taken back to WL main page - The page with Live Search and the Sign-in to Windows Live link. Check in Messaging and Windows Live mailbox is gone.
***********
Posted by Steve at 5:33 PM No comments: